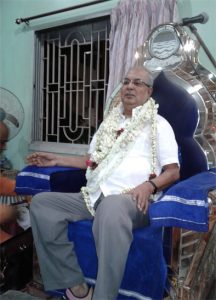 Once, ten friends were venturing out in the woods. All of them took a path which led them to a river. As their destination was on the other side of the river bank, they felt that crossing the river was inevitable. Hence, all the friends swam across the river to recommence their journey. Once, on the other side, one of the friends decided to count to make sure that all of them had made it to the other side. But to his utmost dismay, he saw that there were only nine friends. No matter how much he counted, he had the same answer. He was alarmed as he thought that one friend must have been carried away by the river current. He mourned for his lost friend.

It was at that very moment that a sage who was passing by saw the boy and approached him.
The boy shared his grief with the sage and told him, “Oh reverend one, I have lost a friend. We were crossing the river and one of my friends was carried away by the current. Only nine of us are left now.”
The sage mentally re-counted the number of boys and smiled. He asked the boy,” Are you sure that there are nine of you? I think that you should count again.”

The boy counted again but arrived at the same conclusion. The sage asserted,” The tenth man is not lost, but exists. Count again!”

Having faith on the sage the boy counted numerous times but he could only count till nine. Dejected, the boy said,” O noble one! My repeated efforts are leading me to the same result. Where is the tenth friend? Please make him come to me. Otherwise my mind will not become peaceful. I have come to your refuge. You are my only hope.”
The sage took pity on the boy. He put his hand on the boy’s chest and remarked, “You are the tenth friend!”
The boy was dumbfounded but soon the truth dawned upon him. Since the beginning, he had been counting everyone except him. The cause of his grief was his own folly. But, this realization relinquished his egoistic knowledge and his mind became peaceful.

Here, nine friends are equivalent to the five sense organs and mind, intellect, citta and ego. The tenth is the Pure Self or the Highest reality or Brahman, that is my own Self. I myself is my own nature , but that is oblivious to me.

Here, the sage is none other than the Spiritual Master who guides us on the Path of re awakening. The Master or the Guru has an undying compassion for the disciple just as a mother has for her child. Seeing the eagerness of his disciple, he unveils the Truth. Patience, bareness and faith in Guru leads one to the Truth- ‘You are the Tenth or You are the Brahman.”